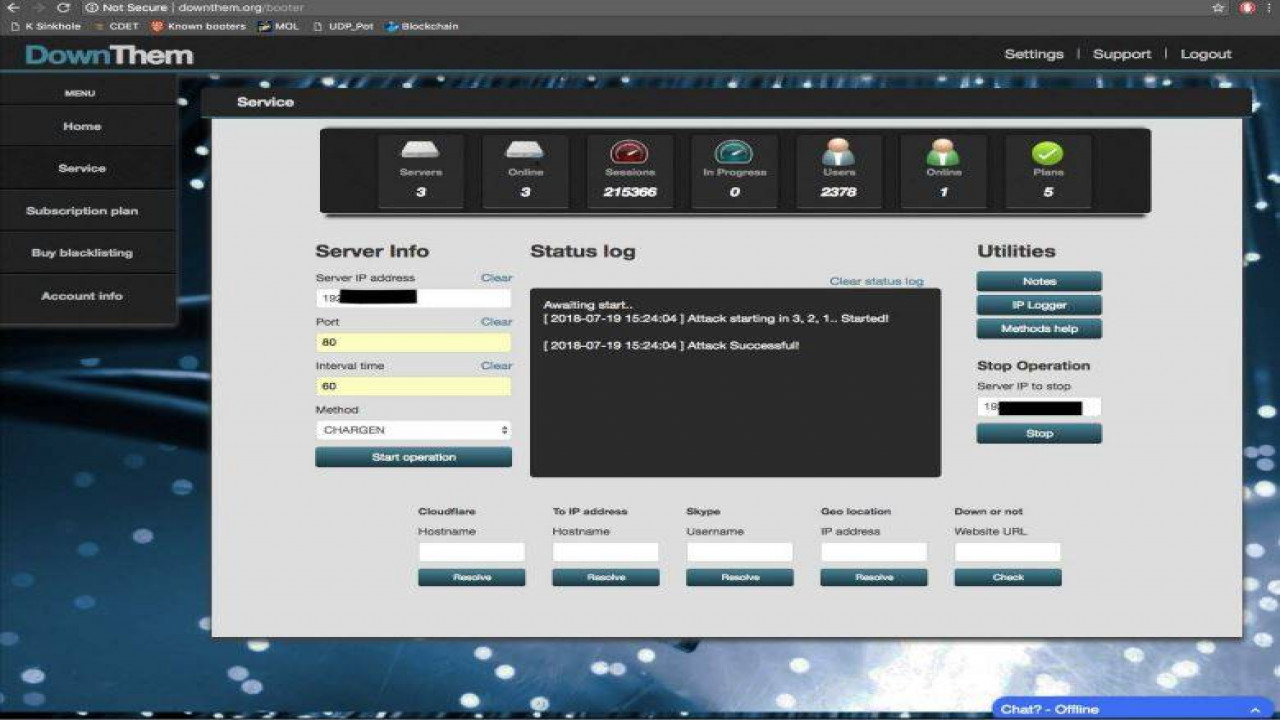 A 33-year-old Illinois man was sentenced to two years in prison today following his conviction last year for operating services that allowed paying customers to launch powerful distributed denial-of-service (DDoS) attacks against hundreds of thousands of Internet users and websites.

Matthew Gatrel of St. Charles, Ill. was found guilty for violations of the Computer Fraud and Abuse Act (CFAA) related to his operation of downthem[.]org and ampnode[.]com, two DDoS-for-hire services that had thousands of customers who paid to launch more than 200,000 attacks.

Despite admitting to FBI agents that he ran these so-called “booter” services (and turning over plenty of incriminating evidence in the process), Gatrel opted to take his case to trial, defended the entire time by public defenders. Gatrel’s co-defendant and partner in the business, Juan “Severon” Martinez of Pasadena, Calif., pleaded guilty just before the trial.

Prosecutors said Downthem sold subscriptions allowing customers to launch DDoS attacks, while AmpNode provided “bulletproof” server hosting to customers — with an emphasis on “spoofing” servers that could be pre-configured with DDoS attack scripts and lists of vulnerable “attack amplifiers” used to launch simultaneous cyberattacks on victims.

Booter and stresser services let customers pick from among a variety of attack methods, but almost universally the most powerful of these methods involves what’s known as a “reflective amplification attack.” In such assaults, the perpetrators leverage unmanaged Domain Name Servers (DNS) or other devices on the Web to create huge traffic floods.

Ideally, DNS servers only provide services to machines within a trusted domain — such as translating an Internet address from a series of numbers into a domain name, like example.com. But DNS reflection attacks rely on consumer and business routers and other devices equipped with DNS servers that are (mis)configured to accept queries from anywhere on the Web.

Attackers can send spoofed DNS queries to these DNS servers, forging the request so that it appears to come from the target’s network. That way, when the DNS servers respond, they reply to the spoofed (target) address.

The bad guys also can amplify a reflective attack by crafting DNS queries so that the responses are much bigger than the requests. For example, an attacker could compose a DNS request of less than 100 bytes, prompting a response that is 60-70 times as large. This “amplification” effect is especially pronounced if the perpetrators query dozens of DNS servers with these spoofed requests simultaneously.

The government charged that Gatrel and Martinez constantly scanned the Internet for these misconfigured devices, and then sold lists of Internet addresses tied to these devices to other booter service operators.

“Gatrel ran a criminal enterprise designed around launching hundreds of thousands of cyber-attacks on behalf of hundreds of customers,” prosecutors wrote in a memorandum submitted in advance of his sentencing. “He also provided infrastructure and resources for other cybercriminals to run their own businesses launching these same kinds of attacks. These attacks victimized wide swaths of American society and compromised computers around the world.”

The U.S. and United Kingdom have been trying to impress on would-be customers of these booter services that hiring them for DDoS attacks is illegal. The U.K. has even taken out Google ads to remind U.K. residents when they search online for terms common to booter services.

The case against Gatrel and Martinez was brought as part of a widespread crackdown on booter services in 2018, when the FBI joined law enforcement partners overseas to seize 15 different booter service domains.

Those actions have prompted a flurry of prosecutions, with wildly varying sentences when the booter service owners are invariably found guilty. However, DDoS experts say booter and stresser services that remain in operation continue to account for the vast majority of DDoS attacks launched daily around the globe.