A distributed denial-of-service (DDoS) attack is a malicious attempt to disrupt normal traffic of a targeted server, service or network by overwhelming the target or its surrounding infrastructure with a flood of Internet traffic. DDoS attacks achieve effectiveness by utilizing multiple compromised computer systems as sources of attack traffic. Exploited machines can include computers and other networked resources such as IoT devices. From a high level, a DDoS attack is like a traffic jam clogging up with highway, preventing regular traffic from arriving at its desired destination. 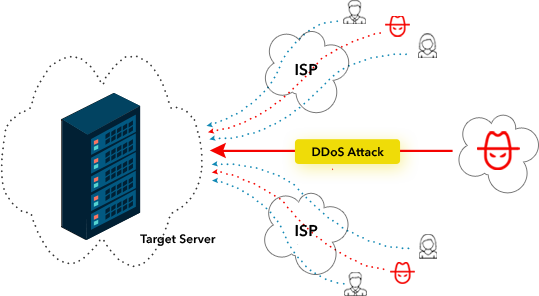 What is an IP stresser?

An IP stresser is a tool designed to test a network or server for robustness. The administrator may run a stress test in order to determine whether the existing resources (bandwidth, CPU, etc.) are sufficient to handle additional load.
Testing one's own network or server is a legitimate use of a stresser. Running it against someone else's network or server, resulting in denial-of-service to their legitimate users, is illegal in most countries.

What are booter services?

Booters, also known as booter services, are on-demand DDoS (Distributed-Denial-of-Service) attack services offered by enterprising criminals in order to bring down websites and networks. In other words, booters are the illegitimate use of IP stressers.
Illegal IP stressers often obscure the identity of the attacking server by use of proxy servers. The proxy reroutes the attacker's connection while masking the IP address of the attacker.
Booters are slickly packaged as SaaS (Software-as-a-Service), often with email support and YouTube tutorials. Packages may offer a one-time service, multiple attacks within a defined period, or even "lifetime" access. A basic, one-month package can cost as little as $19.99. Payment options may include credit cards, Skrill, PayPal or Bitcoin (though PayPal will cancel accounts if malicious intent can be proved).

•SYN Flood: A succession of SYN requests is directed to the target’s system in an attempt to overwhelm it. This attack exploits weaknesses in the TCP connection sequence, known as a three-way handshake.
•HTTP Flood: A type of attack in which HTTP GET or POST requests are used to attack the web server.
•UDP Flood: A type of attack in which random ports on the target are overwhelmed by IP packets containing UDP datagrams.
•Ping of Death: Attacks involve the deliberate sending of IP packets larger than those allowed by the IP protocol. TCP/IP fragmentation deals with large packets by breaking them down into smaller IP packets. If the packets, when put together, are larger than the allowable 65,536 bytes, legacy servers often crash. This has largely been fixed in newer systems. Ping flood is the present-day incarnation of this attack.
•ICMP Protocol Attacks: Attacks on the ICMP protocol take advantage of the fact that each request requires processing by the server before a response is sent back. Smurf attack, ICMP flood, and ping flood take advantage of this by inundating the server with ICMP requests without waiting for the response.
•Slowloris: Invented by Robert ‘RSnake’ Hansen, this attack tries to keep multiple connections to the target web server open, and for as long as possible. Eventually, additional connection attempts from clients will be denied.
•DNS Flood: The attacker floods a particular domain's DNS servers in an attempt to disrupt DNS resolution for that domain
•Teardrop Attack: The attack that involves sending fragmented packets to the targeted device. A bug in the TCP/IP protocol prevents the server from reassembling such packets, causing the packets to overlap. The targeted device crashes.
•DNS Amplification: This reflection-based attack turns legitimate requests to DNS (domain name system) servers into much larger ones, in the process consuming server resources.
•NTP Amplification: A reflection-based volumetric DDoS attack in which an attacker exploits a Network Time Protocol (NTP) server functionality in order to overwhelm a targeted network or server with an amplified amount of UDP traffic.
•SNMP Reflection: The attacker forges the victim's IP address and blasts multiple Simple Network Management Protocol (SNMP) requests to devices. The volume of replies can overwhelm the victim.
•SSDP: An SSDP (Simple Service Discovery Protocol) attack is a reflection-based DDoS attack that exploits Universal Plug and Play (UPnP) networking protocols in order to send an amplified amount of traffic to a targeted victim.
•Smurf Attack: This attack uses a malware program called smurf. Large numbers of Internet Control Message Protocol (ICMP) packets with the victim’s spoofed IP address are broadcast to a computer network using an IP broadcast address.
•Fraggle Attack: An attack similar to smurf, except it uses UDP rather than ICMP.